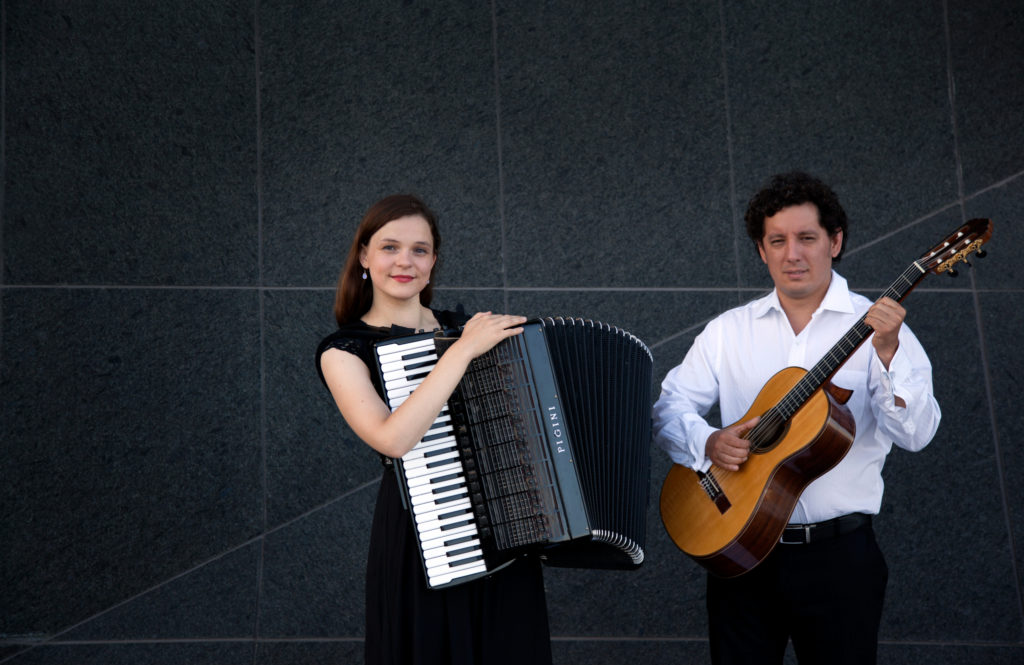 “ Fantastic, bravo! I can see your deep musical work! “

The duo from Hamburg Lux Nova Duo, is conformed by the peruvian guitarist Jorge Paz Verastegui and German accordionist Lydia Schmidl. The two musicians harmonize so well with each other that they are also a married couple. They started to play together in 2012 in the inspiring Barcelona, and cince that moments the started to show a new light with the unusual combination of instruments.

The birth of a new composition – the world premiere – is a special moment for the two musicians. Numerous compositions have been dedicated to the innovative duo. The duo works with composers all over the world. Among them is Jose Maria Sanchez Verdú,one oft he most recognized european composers, and Leo Brouwer, who is considered one of the most important composers in Latin America and won a Grammy 2017. In addition, the Argentinian composer Mario M. Mary wrote “Misteriosa persistencia” for the Lux Nova Duo. The Nigerian- Swiss composer Charles Uzor used a Sephardic melody and parts of the Bach chorale BWV 640 on his compostion, with the duo playing together with a recording of two theorbes. At their debut concert in the Elbphilharmonie, they played a world premiere of the famous Peruvian composer Alejandro Nunez Allauca. He combines European composition techniques with mystical sounds of the Andes. For the Peruvian guitarist of the duo, it is a great pleasure to perform music from his country.

Their first CD Intuiciones, with Spanish/Latin American music, was the first prize of a competition organized by the University of the Arts Bremen. The following year, they recorded the CD Hamburg Dialogues (Hamburg composers in focus) with the Label Costa Records. The duo is also very active working with young composers, they give regularly masterclases and pedagogic concerts.

The Lux Nova Duo performed in Spain, Italy, South America and Germany. They have played in the Elbphilharmonie, Die Glocke Bremen, Laeiszhalle, the Resonanz Raum Hamburg, the Auditorium Enrique Granados Lleida (Spain), the ZKM Karlsruhe, the Festival Klub Katarakt – Kampnagel, the Brandenburgische Sommerkonzerte Festival, the Josep Soler Barcelona Festival and the Forum Neue Musik Hamburg. In 2014 and 2018, they travelled to South America for several concerts and performed at the German-Peruvian Institute and the Catholic University of Lima.